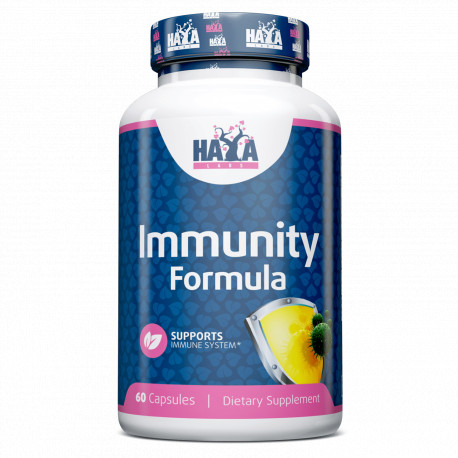 The product HAYA Labs Immunity Formula 60 Caps. combines key vitamins, minerals, and herbs, thus supporting the body immune system and enhancing the overall health and condition. The immunity is a complex network of cells, organs, specialized tissues, and chemical compounds. The lymph nodes, spleen, marrow, thymus, and tonsils play a role, as well as the antibodies, the specialized white blood cells, known as natural killers (NK cells), T and B cells (commonly known as lymphocytes).
There are two types of immunity that protect the body: inborn and adaptive. The inborn is providing the first barrier against the microorganisms and is present from the moment of birth. Skin, mucus membrane, and stomach acids are examples of inborn immunity, which protects the vulnerable tissues from unwanted microbes, viruses, bacteria, and parasites. The adaptive immunity is necessary during the whole life, for instance after an immunization or during a successful fight against an infection.
Symptoms of lowered immune function include often suffering from cold and flu, repetitive parasite infections, other common infections, which escalate to light or serious conditions, as well as infections that usually are successfully controlled by the immune system. The diet and health factors also have an impact on the immunity. For example, all forms of sugar influence the ability of white blood cells to destroy bacteria: according to some research - a diet rich in sucrose (table sugar) destroys the immune system. The consumption of alcohol, including cases of moderate intake also can play a role on wide range of immune barriers. Moreover, the excessive low weight and the obesity are related to immune disorders.
Below, there is a list of substances included in HAYA Labs Immunity Formula 60 Caps. It is a brief presentation of the most important information; for further details (including interactions, cautions, and facts to be considered, while taking this food supplement), see the individual product sheets.
Vitamin A
Since Vitamin A helps cells with their normal reproduction, its deficiency destroys the inborn immunity, threatening the maintenance of adequate amount of protective cells and in this way enhancing the destruction of organs, through an infection. Vitamin A plays an important role in the adaptive immunity, as a deficit decreases the body ability to produce antibodies that are necessary to fight with infections.
Vitamin C
Vitamin C, a powerful antioxidant and cell protector, stimulates the immune system, while in the same time increases and promotes the activity of some particular immune cells. Analysis of two double-blind studies leads to the conclusion that Vitamin C, if taken in the beginning of a cold, considerably shortens its duration.
Vitamin E
As a form of antioxidant, which protects the cells’ membranes and other fat-soluble parts of the body, Vitamin E increases the effects of some immune cells. One preliminary study demonstrates an improved immune function after a combined intake of antioxidants Vitamin A, Vitamin C, and Vitamin E, especially increasing in this way the amount of immune cells.
Riboflavin
Riboflavin (also known as Vitamin B12) is necessary to process amino-acids and fats, to activate Vitamin B6, folic acid, and to help with the transformation of carbohydrates into andesine triphosphate (ATP) - the fuel used by the body. In some cases, riboflavin can play a role of antioxidant.
Magnesium
Magnesium is a base material of the human body. It is necessary for the formation of bones, proteins, and fatty acids, activates B Vitamins, relaxes the muscles, decreases the clotting, forms ATP and new cells.
Zinc
Zinc is an essential mineral that is needed, in addition to many other functions, for the promotion of immune activity. It takes part in the virus replication, thus affecting virus ability to enter the cells in the body, while in the same time can help the immune cells to fight against cold, and to alleviate its symptoms.
Selenium
Selenium is an essential trace mineral, which supports healthy immune system. Double-blind study demonstrates that when combined with zinc, it can enhance the immunity through infection decrease. The analyses show that trace minerals such as Selenium are perhaps the most important representatives of this group in improving the immune function and prevention of infections.
Echinacea
The studies indicate that Echinacea stimulates the activity of different immune cells, especially NK cells. Research evidences suggest that it accelerates the recovery from cold, through immune stimulation (contrarily to direct destruction of the virus).
Astragalus
The complex polysaccharides, present in Astragalus, play a role of immunomodulators.
Immunomodulators possess a natural ability to increase the production of messenger cells, which regulate the immune system. The overall result is a more effective immunity. The research on Astragalus shows its strength to protect from decrease of white blood cells in people, exposed to himio and radio therapy, and also can increase the levels of antibodies in healthy individuals.
Garlic
Recently garlic demonstrates powerful immune-stimulating properties and shows ability to promote the process of phagocytosis, during which the white blood cells swallow (or eat) the intruders.
Korean ginseng
Panax ginseng, commonly known as Korean or Chinese ginseng, is a member of Araliaceae family, which includes the close related American ginseng (Panax quinquefolius) and the more different Siberian ginseng (Eleutherococcus senticosus), known also as eleuthero. The studies suggest that Ginseng supports the adrenal gland, thymus, and spleen (thus enhancing the immune system).
Eleutherococcus senticosus (Eleuthero)
The common names of this herb include Siberian ginseng and Devil’s bush. Eleuthero shows ability to improve the athletic performance, to stimulate the nervous system, to increase the memory and concentration, as well as to support the immunity.
Reishi Mushroom
Although it has been used in the Chinese traditional medicine for at least 2000 years, only just recently Reishi Mushroom came under the spotlight due to its obvious properties to stimulate the immunity. The research shows that Reishi can transform many components of the immune system, including NK cells. Moreover, a study suggests that its effect, played on such types of cells as Т and B, gives an additional evidence of Reishi’s contribution for a raised immunity.
Recommended dosage:
Take 2 capsules a day.