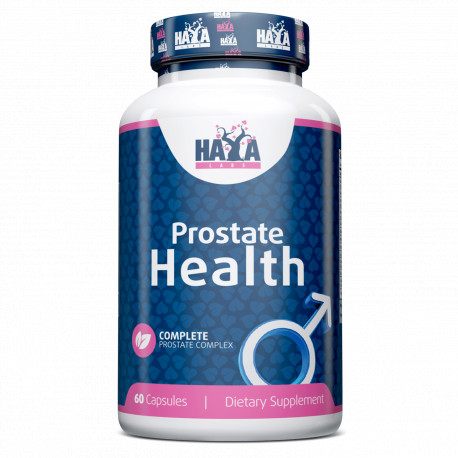 HAYA Labs Prostate Health 60 Caps. is a unique combination of  vitamins, minerals and herbs that help to maintain the normal functioning of prostate.

This product is no longer in stock

HAYA Labs Prostate Health 60 Caps. is a unique combination of  vitamins, minerals and herbs that help to maintain the normal functioning of prostate. The prostate gland is a small, donut-shaped and size of a walnut, organ surrounding the urethra, located where it lefts bladder. Prostate produces an alkaline substance which builds up a large proportion of male reproductive fluid. By reaching the age of 40, the cells of the prostate gland often become larger; this is known as an adenoma of the prostate gland, or shortly (BPH). BPH is a non-cancerous enlargement of the prostate that is harmless in some cases. Often increased prostate presses on the urethra and affect urination; this can lead to urological symptoms associated with bladder. Many studies have shown that more than half of the men over 50 years suffer from an enlarged prostate and related symptoms. As they get older, up to 80% experience unpleasant symptoms which may include frequent urination, urination at night, and pain in the lower back.
While age contributes to the increase of the prostate gland, hormones may also play a role. Once in the prostate cells, testosterone is converted into another, more powerful male hormone, dihydrotestosterone (DHT). DHT is responsible for promoting the division of prostate cells which results in increasing their number.
DHT levels are 5times higher in case of prostatic enlargement, in comparison with normal size. But if we can prevent the conversion of testosterone into DHT, BPH is not observed, and in some cases even the process can be reversed.
Men in the mid 40s and older should consult a healthcare professional for information on prostate and its prophylactics.
This is a shortened list of ingredients of HAYA Labs Prostate Health 60 Caps.
Saw palmetto
Saw palm is very useful for men suffering from prostate problems; its use is currently focused on DHT. Saw Palmetto relieves symptoms associated with this condition, such as frequency and urgency of urination, excessive nighttime urination or delay of urination. In addition, this ingredient promotes optimal anti-inflammatory effect  to reduce swelling and promote normal flow of urine. Moreover, Saw palmetto shows ability to prevent the conversion of testosterone into DHT in some studies.
Cayenne pepper
Cayenne pepper has traditionally been used to promote the health of the prostate and the urinary tract, because it contains capsaicin and saponins, which stimulate blood flow.
Beta sitosterol
Components of the oils of some plants contain a mixture of phytosterols and plant hormones called beta-sitosterol. The studies support the ability of at least 20 mg of them to increase the flow of urine and to reduce significantly the amount of residual urine. Researches suggests that the beta-sitosterol interferes with the synthesis of prostaglandin, and thus reduce inflammation.
Green tea extract
In a recent double blind study, men with precancerous changes in the prostate is subjected to administration of green tea extract or a placebo for a period of one year. The result shows that the green tea can promote prostate health in people at high risk of developing the disease.
Pumpkin
A few years ago, scientists noticed that men who live in areas where the pumpkin seeds are part of the diet showed a lower frequency of occurrence of prostate problems. This may be due to the content of the essential fatty acids, since the EFA are considered useful for health of the body. Good source of zinc, pumpkin contain nutrients that promote the health of the prostate, bladder and urinary tract. It is most effective when combined with nettle and / or Sao palmetto contained in this formula.
Nettle
Nettles has positive effects on the maintenance of prostate, bladder and urinary tract. It also promotes the flow of urine and supports less urination.
L-glycine and L-glutamic acid
Recently, in a controlled study,men with BPH undergo diet with three amino acids, including glycine and glutamic acid (the third one is alanine). After three months, approximately half of them have reported a reduced urgency and frequency of urination and/or at least delaying the onset of micturition, by reducing the swelling of the prostate.
Lycopene
Lycopene is one of the most widely studied materials, showing the ability to promote prostate health. It is highly valued as an important element for promoting health in men and is the subject of ongoing analyzes of the anti-cancer effects. Lycopene is the most abundant carotenoid, found in the prostate and is used as an antioxidant against free radicals.
Advantages of HAYA Labs Prostate Health 60 Caps.:
Recommended dosage:
Take 2 capsules per day with water.